Email This Page to a FriendWhy I am a Boatbuilder (and Not a Doctor), by Harry Bryan

The purpose of this short autobiographical essay, that I wrote for a local high school job fair, is to offer encouragement to students who are not having an easy time in school.

My father was a doctor.  His father died when Dad was quite young, leaving little money for my grandmother and her five children.  Dad worked hard to help the family and eventually to put himself through medical school.  Having been driven by necessity to become a financial success, he had little tolerance for those who did not work hard, and little understanding of how artistic pursuits could be as valuable as a professional career.

From as far back as I can remember I built things, and I took other things apart to see how they were made.  Dad had a hobby-type woodworking shop, and I inherited a set of books called The Boy Mechanic from my uncles.  These were old books, published soon after the invention of the automobile and the airplane, and their magic was in telling young readers that building these marvels was something that they could do themselves. However, I do not think that either the shop or The Boy Mechanic books initiated the desire to create things with my hands.  It is more likely that that was a part of my personality from birth.

My father warned me that I could not make a comfortable living from a shop. It was understood that I would become a doctor or lawyer, and thus have the money and time to set up a shop as a hobby.

My formal schooling was not successful.  I could not concentrate in class or make myself do homework.  Each report card sent home for a parental signature resulted in stern discipline. It wasn’t the low grades that made Dad so angry as much as the teacher’s rating of my effort…..poor.

My parents paid to send me to a private high school with the hope that my grades and attitude would improve.  They did not, and I was bothered by a sense of guilt for wasting money spent on tuition as well as a growing concern as to how I would support myself as an adult.  My high school class of 88 students was graduated in 1964.  I was rated 88th.

Throughout these years I spent all the time that I could in the school shop or, on vacations, in the shop at home.  I made go-carts, furniture, rockets, and boats.  I wanted to build more boats.  Instead, I went to university for a year and a half, then dropped out.

After four years in military service, I tried school again.  Here, I was influenced by two people who told me the same thing that the publishers of The Boy Mechanic had told me many years before.  The first person, who was a teacher, told me that I should do what I loved doing, and learn through that love.  He told me that sitting in rows and memorizing information was not the best way for some people to learn.  The second person told me that if I wanted to spend my life building boats then that’s what I should do.  I will always be in debt to that teacher who suggested that it wasn’t necessarily my fault that school was so hard for me.  I married the second person. 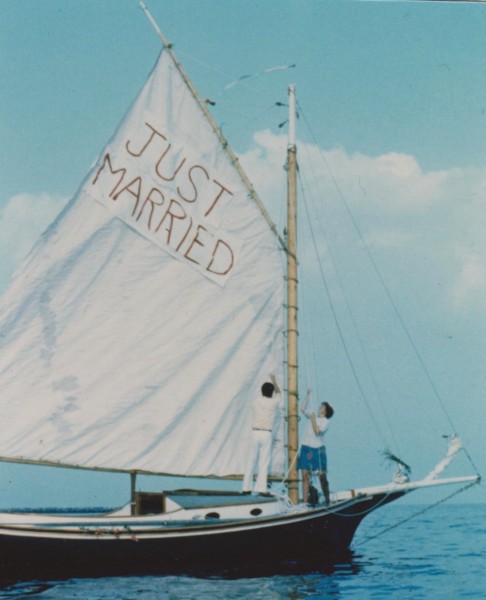 Because of these two people, I now believed in myself.  I went to the university library as often as I could and learned about tools and materials, about boats, about gardening, and about how to construct buildings.  I never did graduate because it no longer mattered.  I had learned how to learn, and that is the most important thing a school can teach.

My father was right.  Few people make very much money creating things in a small shop.  A modest income, however, can be sufficient if it's combined with a frugal lifestyle. Anything you don’t buy is like money in your pocket.  Anything you do or make for yourself teaches you skills, as well as costing less than paying someone else to do it for you.  We have been taught that a key to financial security is specialization. It is more likely that the foundation of real security is diversity.  To make ends meet, I not only build boats, but write about them, sell plans, and teach the skills of boatbuilding and woodworking to others.  My shop can build other things of wood besides boats, if need be.

I often think that if I had been a good student, I might have spent my working life doing something unsuited to me.  I can’t go back in time to avoid those years of uncertainty, but I can try to reach out to others who are struggling in school and ask them what it is that they really like doing and urge them to believe in themselves and do it.


33 Responses So Far to “Why I am a Boatbuilder (and Not a Doctor), by Harry Bryan”: